Oh hey there! What brought you here? Was it your last run for ingredients while baking, when you ran out of some sugar and honey? Or just a regular visit to the supermarket which got you intrigued about where honey comes from and what are the different types of honey?

We all have studied in our schools that honey bees produce honey. But it’s pretty much self explanatory that they aren’t the ones who pack the honey in those containers at the grocery stores. So what’s the process in between? How does honey get from bee hives to the store shelves? Here are all the answers to your questions!

Honey is simply the nectar that the honey bees collect from various flowers. Which is why there are multiple types of honey available in the market. Clover, eucalyptus, manuka, buckwheat, wildflower and so on… and on.. and on… in fact, in the United States alone, there are almost 300 different types of honey.

The process of producing honey is indeed not as sweet as the honey itself tastes. Honey bees have to gather nectar from two million flowers to make one pound of honey. Which means, one bee would have to fly around 90,000 miles, approximately three times around the globe, to make one pound of honey. Which is obviously impossible for one bee to do. That is why the average honey bee actually produces only one twelfth of a teaspoon of honey in its lifetime. Doesn’t it make honey sound more precious than you thought it was?

Another fun fact? A single honey bee visits 500-100 flowers on a single trip out of the hive. Which means, they go trick or treating everyday!

Where Do Different Types Of Honey Come From?

You might have seen many things labelled on a pack of honey. Pasteurized, organic, raw and unfiltered, etc. Does it ever make you wonder if it really makes any difference? Or is the supermarket honey just the same thing as the farmer’s market or organic food distributor’s honey? There definitely is a big difference in those two, and it’s the same as the difference between a bottle of cheap red wine and a bottle of Cabernet Sauvignon or Chardonnay.

The source of all types of honey is the same – flowers. But the type of honey depends on what type of flower is the nectar collected from. So the bottom line is – all honey is produced in the beehives and all honey is raw and organic before it gets pasteurized or processed further.

What Happens To The Honey After It Is Taken Out Of The Beehive?

It depends on the producers. Some of the producers take the honey directly out of the hive to store it in bottles and sell it themselves or ship it to someone else for sale, perhaps a vendor. This product is the raw, unfiltered honey that we often see at a farmer’s market or in an organic food store.

Raw, unfiltered honey is the best type of honey for consumption as it is not processed. After taking it out and straining it, the honey is processed to get rid of the yeast that it contains; then  filtered to remove the air bubbles and get rid of the debris which couldn’t be removed during straining, This process prevents the crystallization of the honey, and makes the honey clearer which is often visually attractive to the buyer. The “processed” honey you can find in most stores is made with this procedure.

This process removes almost all the bee pollen from the honey and the nutrients of the honey. Sometimes it even gives a scope of adulteration to some manufacturers, which means, they can add other unhealthy sweeteners to the honey to get a greater yield or to get a lower cost. So at the end, you are only left with something that tastes like honey.

Is Organic Honey Really Worth It?

It’s almost impossible for any producer to guarantee that their honey is organic. For obvious reasons that the bees fly from flower to flower while collecting nectar. Even if they grow organically-raised flowers, bees have the freewill and freedom to collect nectar from anywhere they want – because they fly around. Oftentimes they can travel from organic flowers to nonorganic flowers. But at the end of the day, this will still be a better option than most of the other honey products you can buy at any supermarket. The only suggestion here can be – don’t trust it only because it has “organic” written on the label.

Here are some of our top picks for the healthiest honey you can buy :

Probably the most popular type of honey sold in the US; clover honey is floral, sweet, and has a sour aftertaste. Clover honey can vary in color. Mostly seen in amber, it can also be clear or water white. It’s often used in baking, making sauces and dressing.

This honey is usually preferred while baking because of its fruity and sweet taste with a mild aroma of orange and citrus. In other words, it has a mild citrus overtone rather than an overpowering orange flavor.

Orange blossom honey is often used as a dressing or as an ingredient while making a sweet sauce. It can be used in a number of ways – you can spread it on English muffins, French toast, or just let it drizzle down your pancakes and enjoy your yummy breakfast. You could also make a sauce, marinade, or a dip out of this! Even better? You can use it as a sweetener for tea or coffee or even your baked goods!

Buckwheat honey is famous for its dark brown color and its strong, full-bodied and thick texture and flavor. This honey is usually a good choice for marinades that are served on the side of flavourful meats and have the stand up to their taste.

It’s rich in antioxidants and is known for its antibacterial properties with some of the Canadian strains said to be effective even against some of the most difficult to treat infections like MRSA and often used to treat sore throats and coughs.

This honey is one of the best types of honey to bake with and an option that is considered to be fairly healthy for consumption.

Manuka honey is a natural sweetener that can be used while cooking and baking. It’s said to be sweeter than sugar which means, you can use almost ½ cup of Manuka honey instead of 1 cup of Sugar.

Manuka honey is popular for its medicinal properties and is often used to heal burns and even diabetic ulcers. It’s extremely effective in treating wounds for which the FDA has actually approved its use for the same.

You may be wondering what’s the big deal between choosing between sugar and honey. But it makes a world of difference. Here’s how!

Also Read: Know How to Measure Ingredients the Correct Way while Baking!

We hope you loved this article! It’s all about honey, after all. We hope you have a very sweet day ahead and let us know what your thoughts are on this! Are you as intrigued about the different types of honey as we are? Also, did this article “stick out” to you? Well…the pun was well-intended! 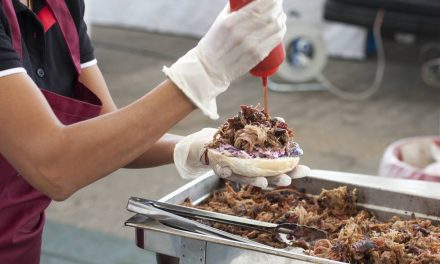 10 Reasons Why Is Street Food So Popular

How To Hold A Virtual Cooking Class To Expand Your Business

How To Start A Food Truck Business?